The Fairy sat looking at him and laughing. "Why do you laugh?" the Marionette asked her, worried now at the sight of his growing nose. "I am laughing at your lies." "How do you know I am lying?" "Lies, my boy, are known in a moment. There are two kinds of lies, lies with short legs and lies with long noses. Yours, just now, happen to have long noses." Pinocchio, not knowing where to hide his shame, tried to escape from the room, but his nose had become so long that he could not get it out of the door.
Crying as if his heart would break, the Marionette mourned for hours over the length of his nose. No matter how he tried, it would not go through the door. The Fairy showed no pity toward him, as she was trying to teach him a good lesson, so that he would stop telling lies, the worst habit any boy may acquire. But when she saw him, pale with fright and with his eyes half out of his head from terror, she began to feel sorry for him and clapped her hands together. A thousand woodpeckers flew in through the window and settled themselves on Pinocchio's nose. They pecked and pecked so hard at that enormous nose that in a few moments, it was the same size as before.
"How good you are, my Fairy," said Pinocchio, drying his eyes, "and how much I love you!" ~from The Adventures of Pinocchio by Carlo Collodi, 1883
Email ThisBlogThis!Share to TwitterShare to FacebookShare to Pinterest
Newer Post Older Post Home
12-tone birthday Alice in Wonderland ambient bluesy Christmas Emily Dickinson film music Halloween interviews live performances melancholy microtonality minimalist nursery rhymes octopus music odd meters piano covers polyrhythms reviews Sacrificial Barbie spider music trumpet and piano voice and piano 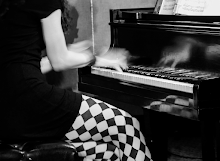 Discover where Whimsically Macabre is lurking on the Web